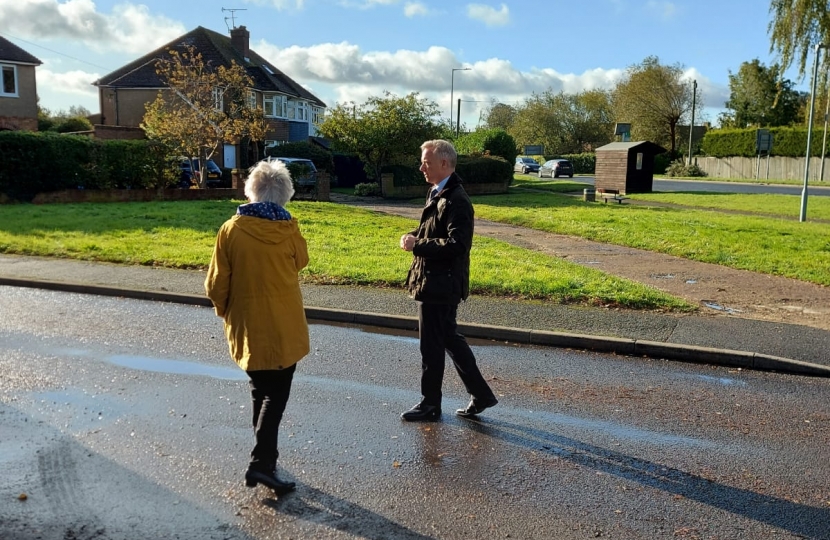 Rob today has paid tribute to local residents, emergency workers and council staff who came together to tackle the weekend’s floods caused by Storm Alex, and called on Thames Water to provide more help to affect those worst affected.

This morning Rob visited several of the areas hit by the deluge.

Rob went to Pebble Brook school, which had to close on Monday because raw sewage had risen through the drain and flooded part of the grounds.

“I was very impressed to see how quickly the staff and caretaker of the school had cleaned up and got back to normal, so that children only had to miss one day of lessons. The pupils were clearly very glad to be back in class.”

Rob went on to Penn Road which was still closed after the floods. He then visited Stoke Mandeville, to speak to residents of Brudenell Drive, where flood water reached the doorsteps of several properties.

“I invited local councillors Peter Strachan and Richard Newcombe to join me to hear first-hand the concerns of Stoke Mandeville residents and the landlady of the pub, who told me they often experience flooding when there is very heavy rain. It was only thanks to a local resident who had pumps that the water could be drained away as quickly as it was – despite that, at least one parent had to carry his child to school through the water on Monday. Peter and Richard have assured me and residents that they will work with council officers to get to the bottom of the cause of the flooding.”

Finally, Rob went to Weedon Road in Aylesbury, where some residents reported their gardens being flooded with raw sewage to a depth of 10 inches over the weekend.

"It was quite shocking to see the gardens in Weedon Road, strewn with toilet paper and some still covered in filthy water. I am very concerned about the health risk from the sewage which is clearly there.  Residents have done their best to clean up, but they desperately need help and I call on Thames Water to do everything possible to assist.”

After his visit, Rob added:

“The rainfall over the weekend was some of the worst ever experienced in the county, and caused disruption for many people in Aylesbury, Stoke Mandeville, Watermead, Weston and Turville.

“I want to thank Thames Valley Police, Bucks Fire & Rescue Service, Buckinghamshire Council, Transport for Bucks, local residents, churches and other organisations for their tireless work to keep people safe, protect property and ensure the resumption of local services as soon as possible.

“I've received updates from the Environment Agency and am pleased the situation is improving. I strongly recommend constituents sign up for the Agency’s flood warnings. The service is free, and you will receive an email or text message if your local area is at risk of flooding. You can search for “floodline” online or call 0345 988 1188 to register.”

Rob today has called for the cosmetic use of Botox and fillers to be banned for children.