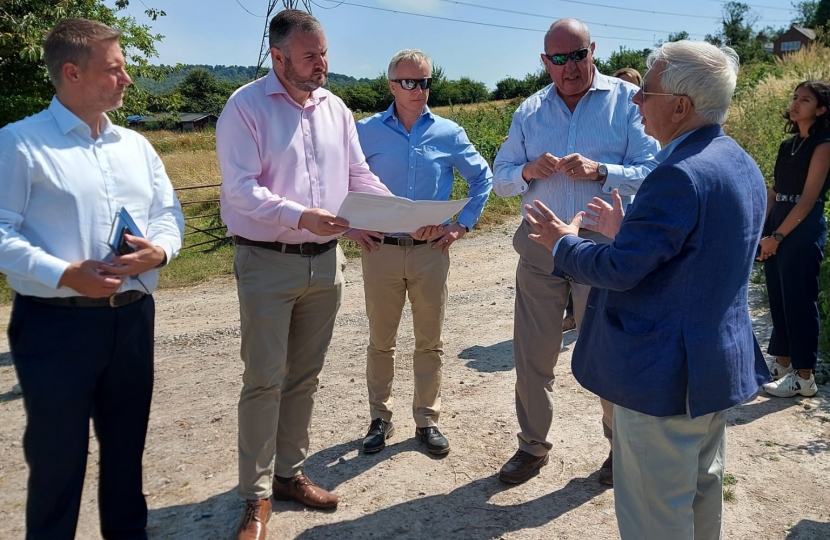 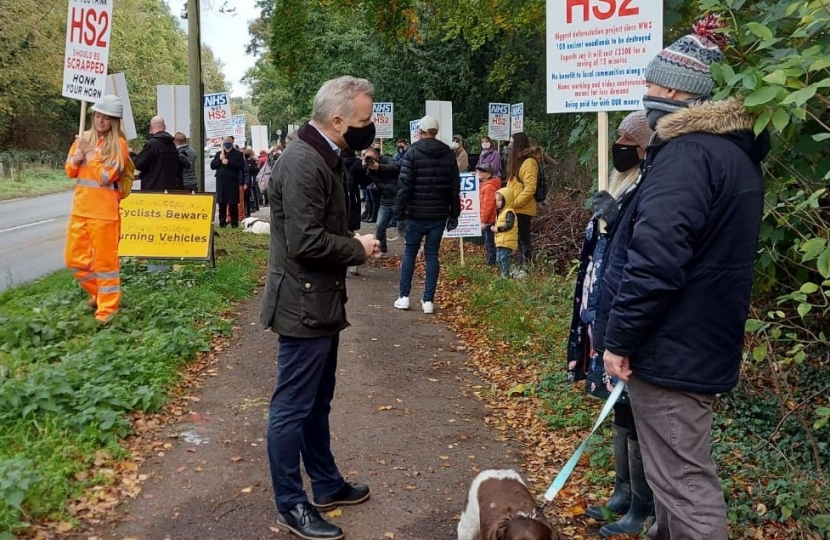 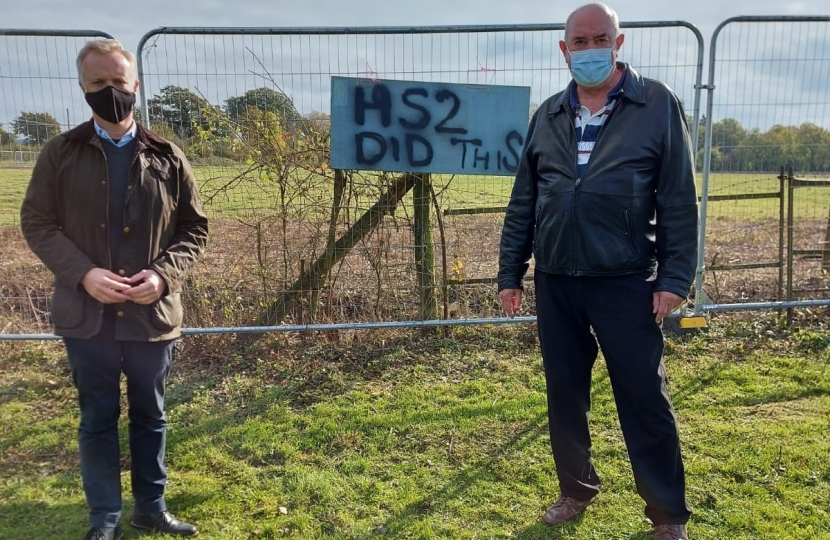 I completely share the views of the vast majority of residents across the Aylesbury constituency that HS2 should be scrapped; as I stated from the very beginning of my election campaign, I do not believe we need this railway. It makes no sense economically, with a weak business case and spiralling construction costs. It makes no sense environmentally, with more than a hundred ancient woodlands, being destroyed for a line that will never be carbon neutral over the course of its 120 year lifespan. I remain absolutely convinced that the scheme will do enormous damage to our area with zero benefit to the people of Aylesbury and the nearby villages.

On behalf of residents and businesses affected, I have repeatedly challenged the Transport Secretary, Grant Shapps, and the HS2 Minister, Andrew Stephenson, about the relevance, value for money and environmental impact of HS2. I have put on record my opposition to this useless behemoth in parliamentary debates, I have lobbied the Chancellor of the Exchequer on the business case and I have taken my concerns directly to the Prime Minister on several occasions – both privately and publicly.

Despite this, the Government continues to believe that HS2 will still be relevant in the decades ahead, and has committed to the construction of the railway. In 2016, before my time as Member of Parliament, the House of Commons voted 10-1 in favour of the project at 3rd Reading and it is worth noting that the Liberal Democrats voted in support, as well as MPs from all other parties. Sadly, even now there is considerable cross-party support for the scheme in Parliament.

My office continues to push HS2 Ltd to ensure that proper mitigation is implemented now that construction work is underway. I have been working with groups across the constituency from Wendover to Fairford Leys and Stoke Mandeville, attending meetings to hear their concerns. In particular, I have lobbied hard for improvements to noise mitigation in Wendover following the government’s refusal to construct a bored mined tunnel, and I have ensured compensation has been paid to landowners who had been subjected to extraordinary delays and appalling treatment.

I am absolutely determined to hold HS2 Ltd’s feet to the fire to ensure they live up to their pledge to be good neighbours: like you, I want to see action, not just words. I will continue to instist that local people are treated with consideration and respect for as long as this white elephant project lumbers on.

Actions taken by Rob and his team:

22 June - Rob has written to the Planning Inspectorate in support of Buckinghamshire Council regarding s17 application https://www.robbutler.org.uk/news/rob-butler-mp-writes-support-council-…

15 June - Meeting with the Environment Agency to discuss their powers in relation to holding HS2 accountable for environmental damage.

19 November - Letter to the HS2 Minister Andrew Stephenson MP concerning the use of Transport and Works Act Orders on the phase one route, and the possible impact on Wendover: https://www.robbutler.org.uk/news/rob-butler-writes-hs2-minister

17 October - Attended the Stop HS2 protest on the A418 near Hartwell.

14 October – Meeting with Andrew Stephenson (HS2 Minister) and Mark Thurston (HS2 CEO), again called for the project to be reassessed given the cost overruns and completely changed environment. Stressed to Mark Thurston the concerns regarding ecological damage, specifically the removal of species without the correct licence.

11 September – Issued a press release and letter to HS2 concerning the unacceptable delays on the A418 Oxford Road.

11 May – Spoke to Andrew Stephenson about individuals constituents’ concerns

18 February – Receives answer to written Q: To ask the Secretary of State for Transport, what steps he is taking to ensure that valid compensation claims by (a) residents and (b) businesses are paid on time and in full by HS2 Ltd. https://members.parliament.uk/member/4745/writtenquestions#expand-1177741

18 February - Received answer to written Q:  To ask the Secretary of State for Transport, what assessment he has made of the hydrological effect of the construction of the green tunnel at Wendover on the potential risk of flooding in Aylesbury. https://members.parliament.uk/member/4745/writtenquestions#expand-1177741

18 February – Received answer to written Q:  To ask the Secretary of State for Transport, if his Department will make an assessment of the potential merits of the proposals for a mined tunnel in Wendover; and if he will publish the results of that assessment. https://members.parliament.uk/member/4745/writtenquestions#expand-1177741

9 February – Attended HS2 engagement event in Fairford Leys, following interventions by Rob to ensure it would go ahead following numerous cancellations by HS2.

5 February – Attended and spoke at a meeting with the Prime Minister calling for HS2 to be scrapped along with other members of the HS2 Review Group.

27 January – Received answer to written Q:  To ask the Secretary of State for Transport, whether staff employed by the Oakervee Review secretariat were seconded from (a) his Department, (a) other Government Departments and (c) executive agencies. https://members.parliament.uk/member/4745/writtenquestions

23 January – Took part in a joint video by conservative colleagues part of the HS2 Review Group calling for HS2’s budget to be diverted to smaller projects including solving traffic congestion.  https://www.youtube.com/watch?reload=9&v=ek-8wMXPzIc

21 January – Received answer to written Q: To ask the Secretary of State for Transport, whether the conclusions of the Oakervee review into HS2 were reached following a full debate and voting by all members of the review panel.

17 January – Filmed a segment for the TPA on why HS2 should be scrapped and the money diverted to other projects in the North and Midlands.

4 January – Attended the Stop HS2 Street stall in Wendover and spoke with residents affected by the construction of the line.

20 December – Joined the HS2 Review Group of Conservative MPs and signed an open letter to the Prime Minister calling for HS2 to be scrapped https://www.telegraph.co.uk/politics/2019/12/21/dozens-mps-including-new-northern-representatives-sign-joint/

Today I took HS2 minister Andrew Stephenson to see first hand the damage being caused to our countryside and communities by the construction of the line. First stop - a farm which is typical of so many locally: delayed compensation, broken promises and poor communication from HS2 ltd.