Rob Butler MP has written to the HS2 Minister, Andrew Stephenson, seeking clarity on the Department for Transport's refusal to grant a mined tunnel at Wendover. The letter was prompted by correspondence concerning the legal position of the Department for Transport changing on amendments to works defined in the HS2 (London-West Midlands) Act. Rob's full letter can be viewed below, with a plain text version at the bottom of the page: 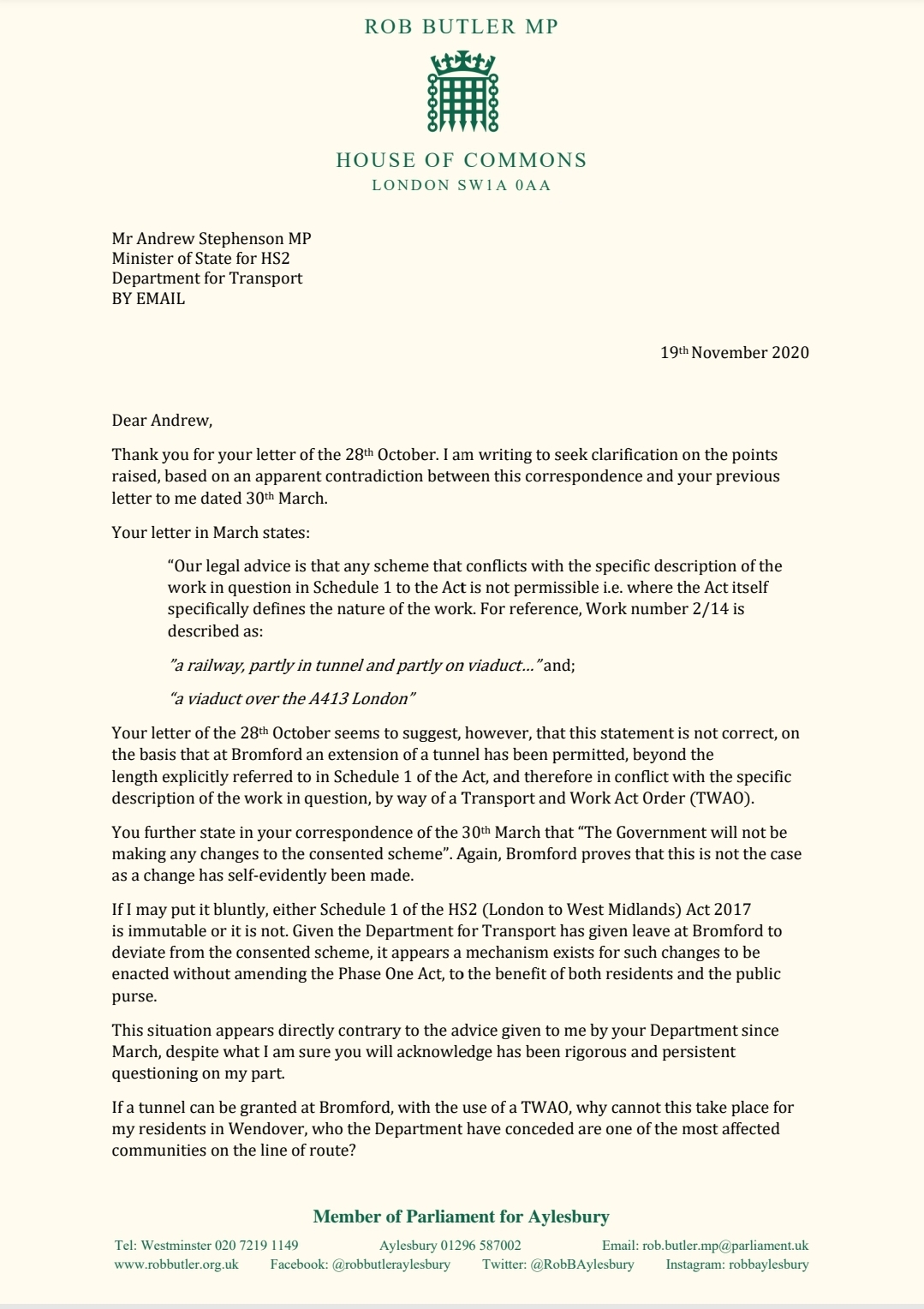 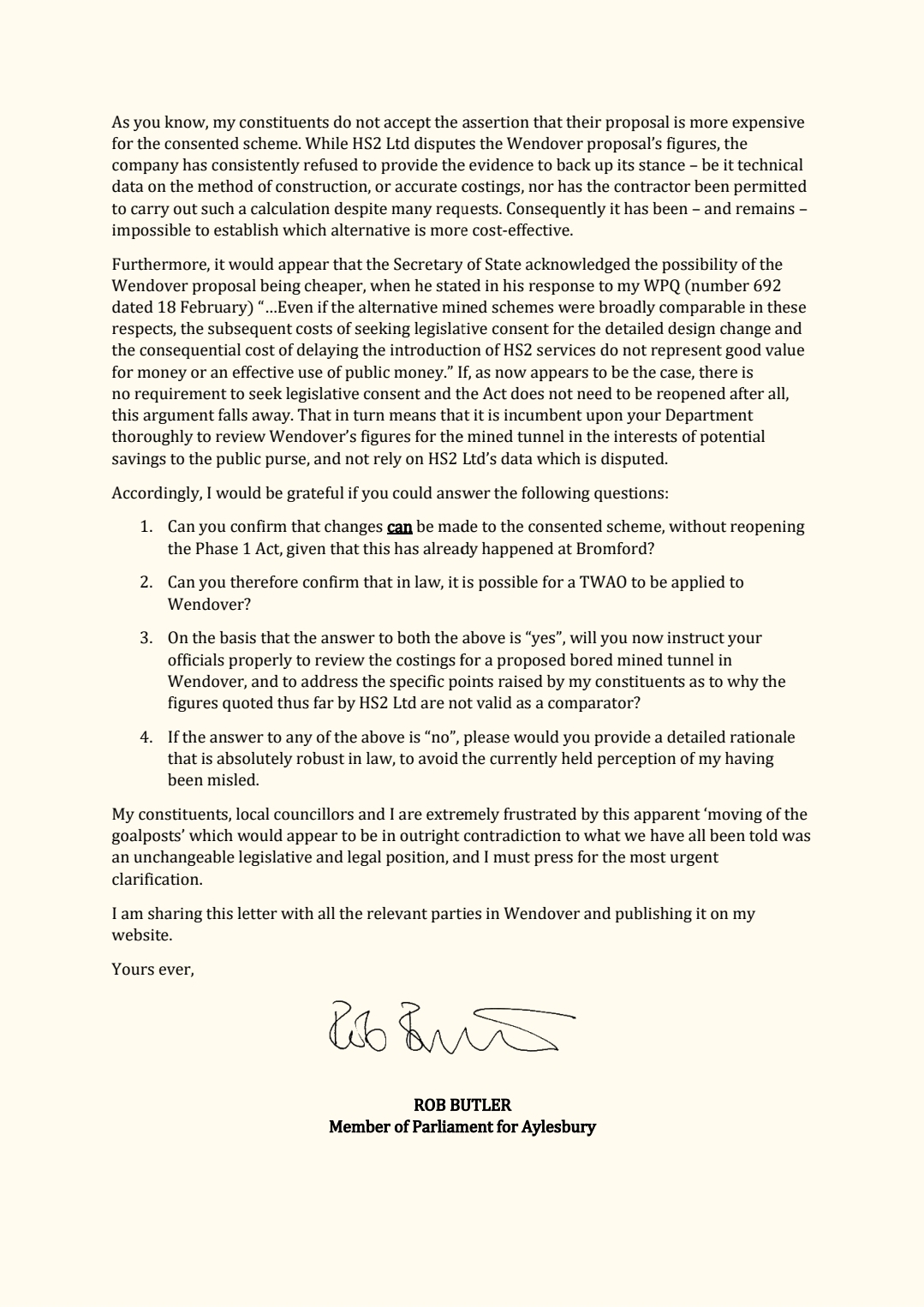 Thank you for your letter of the 28th October. I am writing to seek clarification on the points raised, based on an apparent contradiction between this correspondence and your previous letter to me dated 30th March.

Your letter in March states:

“Our legal advice is that any scheme that conflicts with the specific description of the work in question in Schedule 1 to the Act is not permissible i.e. where the Act itself specifically defines the nature of the work. For reference, Work number 2/14 is described as:

”a railway, partly in tunnel and partly on viaduct…” and;

Your letter of the 28th October seems to suggest, however, that this statement is not correct, on the basis that at Bromford an extension of a tunnel has been permitted, beyond the length explicitly referred to in Schedule 1 of the Act, and therefore in conflict with the specific description of the work in question, by way of a Transport and Work Act Order (TWAO).

You further state in your correspondence of the 30th March that “The Government will not be making any changes to the consented scheme”. Again, Bromford proves that this is not the case as a change has self-evidently been made.

If I may put it bluntly, either Schedule 1 of the HS2 (London to West Midlands) Act 2017 is immutable or it is not. Given the Department for Transport has given leave at Bromford to deviate from the consented scheme, it appears a mechanism exists for such changes to be enacted without amending the Phase One Act, to the benefit of both residents and the public purse.

This situation appears directly contrary to the advice given to me by your Department since March, despite what I am sure you will acknowledge has been rigorous and persistent questioning on my part.

If a tunnel can be granted at Bromford, with the use of a TWAO, why cannot this take place for my residents in Wendover, who the Department have conceded are one of the most affected communities on the line of route?

As you know, my constituents do not accept the assertion that their proposal is more expensive for the consented scheme. While HS2 Ltd disputes the Wendover proposal’s figures, the company has consistently refused to provide the evidence to back up its stance – be it technical data on the method of construction, or accurate costings, nor has the contractor been permitted to carry out such a calculation despite many requests. Consequently it has been – and remains – impossible to establish which alternative is more cost-effective.

Furthermore, it would appear that the Secretary of State acknowledged the possibility of the Wendover proposal being cheaper, when he stated in his response to my WPQ (number 692 dated 18 February) “…Even if the alternative mined schemes were broadly comparable in these respects, the subsequent costs of seeking legislative consent for the detailed design change and the consequential cost of delaying the introduction of HS2 services do not represent good value for money or an effective use of public money.” If, as now appears to be the case, there is no requirement to seek legislative consent and the Act does not need to be reopened after all, this argument falls away. That in turn means that it is incumbent upon your Department thoroughly to review Wendover’s figures for the mined tunnel in the interests of potential savings to the public purse, and not rely on HS2 Ltd’s data which is disputed.

Accordingly, I would be grateful if you could answer the following questions:

My constituents, local councillors and I are extremely frustrated by this apparent ‘moving of the goalposts’ which would appear to be in outright contradiction to what we have all been told was an unchangeable legislative and legal position, and I must press for the most urgent clarification.

I am sharing this letter with all the relevant parties in Wendover and publishing it on my website.

Member of Parliament for Aylesbury

Rob Butler, MP for Aylesbury, has called on the Government to ensure that new doctors’ surgeries are included in all large-scale housing developments during a Parliamentary debate.